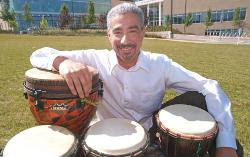 Bang a drum: Sal Nunez has earned national acclaim for his approach to medicinal drumming.

SAN FRANCISCO — No need for that apple — turns out that beating on a drum can help keep the doctor away, say San Francisco health officials.
Drum circles are emerging as an effective and respected treatment method for conditions such as stress and anxiety, according to the San Francisco Department of Public Health, which endorsed the practice in a recent agency report.
Medicinal drumming, formerly called “therapeutic drumming,” is a decade-old practice based on centuries­-­old wisdom, and is being used in The City to keep at-risk youths out of gangs and help trauma victims face their demons, among other uses, the city report said.
The practice was developed by Sal Nunez, a psychologist and professor at City College of San Francisco who has earned national acclaim for the holistic approach. He holds circles to treat trauma victims, and also hosts them for youths and adults in need of psychological counseling.
“It’s a really strong, good therapy that’s been very helpful in keeping kids off the street,” said Public Health spokeswoman Eileen Shields.
“Repetitive patterns influence brainwave activity,” Nunez said. “If a person is susceptible to seizures or perhaps psychosis or has been significantly traumatized, repetitive patterns can trigger some of that.”
The medical community is buying into the practice. Just recently, Nunez’ therapeutic drumming was recognized by the Substance Abuse and Mental Health Services Administration as a “culturally appropriate” and clinically proven practice.
Nunez credits forward-thinking city officials for helping him foster therapeutic drumming.
“It’s giving a voice to the practices that cultures have been utilizing for years,” Nunez said.
maldax@sfexaminer.com
By Jeni Swerdlow|2021-02-11T18:59:23-08:00August 24th, 2009|