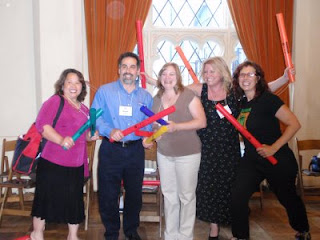 The Rally began its day with a high energy performance by the Cal Marching Band (U.C. Berkeley), then the attendees got down to work. Followed by a day of sitting for talks on such business topics as “Marketing Strategies” and “The Importance of Being Green,” DRUMMM’s Jeni Swerdlow was called in facilitate the “hands-on” grand finale to unsuspecting Ambassadors.

Moments after the emcee’s final announcements, Swerdlow had the auditorium’s chairs up against the walls and the 60 or so sleepy-looking participants in a circle. Dumping a huge pile of “Boomwhackers” in the middle (colorful, tuned percussion tubes that can be struck together, on the floor, or on the body), Swerdlow immediately had people clamoring for their choice of colors and sizes.

What ensued was a 20-minute team building session of epic proportions. The room instantly erupted into a cacophony of sound, then with Swerdlow’s expert facilitation transformed seamlessly into an ensemble of rhythm, teamwork and celebration. Grouping teams by color, Swerdlow effortlessly sculpted the music as groups created their own distinct patterns, then wove them together into an orchestra. It was a grand example of teamwork in a most unique way.

By the end, each and every Ambassador was laughing and yelling with glee at how much fun they had and how good they were able to sound, despite most having never touched a drum before. People ran up to thank Swerdlow for ending the day on on such a positive note, noting how much more bearable their Friday rush-hour commute was going to be, thanks to her and DRUMMM.