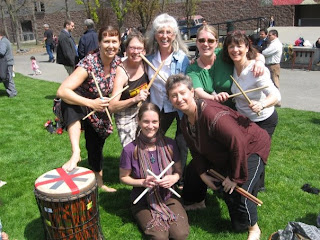 I’m still vibrating from the Seattle World Rhythm Festival last weekend. It was three days of non-stop drumming and dance workshops, concerts and drum circles. Events took place in and around Seattle Center, and featured hundreds of performers, teachers and facilitators from all over the globe.

After attending the fest for five years, I had the honor and pleasure of presenting my first adult workshop this year: Bass Drummm 101–All bass drums, all the time! Forty people and as many dunun, surdos, alfaias, and Arthur Hull nesting drums you could shake a mallet at! When I say we shook the house, I mean WE SHOOK THE HOUSE!

Since I flew up from S.F., I was grateful that the community answered my call for drums. Jamtown John, John’s Music, SWPS, and Michael Clark contributed drums and sticks from their own collection so that participants all had something to play.

I also learned about paradiddles from Pepe Danza, djembe solos from Ibrahima Camara, Guinean dance from Abdoulaye Sylla, Northern Brazilian Maracatu from Ju Linares, and Afro-Brazilian hip hop from Geoff Johns. I was inspired by the doubek stylings of Raquy and the Cavemen, and Mapathe Diop’s Senegalese sabar rhythms.

Saturday evening everyone came together for Arthur Hull’s drum circle, facilitated as playfully and masterfully as only the elf himself can do. Hundreds of people playing together in rhythmic bliss. I was of course taking notes the whole time…

At the Saturday night after party at Nectar Lounge, the energy just kept building with radical marching band Titanium Sporkestra. (My samba band, the Loyd Family Players, had played with them in Seattle earlier in the month at Honk Fest, so I was excited to see them play again.) Great grooves and unexpected twists and turns makes them fun to watch and dance to. And then there was Buraka Som Sistema from Portugal–two laptops, two live drummers, one rapper and one smoking hot singer/dancer–they really turned the heat up!

The festival wrapped up on Sunday with a grand celebration. Each corner of the pavilion was teeming with dozens of musicians from the West African, Afro-Cuban, Middle Eastern and Brazilian Samba School traditions. Master of ceremonies Kim Atkinson gracefully facilitated a dance-frenzy inducing multi-cultural jam. I was fortunate to play with Robert Wallace’s group of funky sambistas, chanting “All bass, all the time” on my drum.

I left the Festival feeling full and satisfied. As always, I got more than I came for and I gave more than I knew I had. Thanks to everyone who helped make Rhythm Fest happen–I look forward to participating again next year!